Posted by Richard Griffith on Wednesday, 22 April 2020 in Uncategorized

Before cell phones, distracted driving might have brought an image of a mom yelling at her children “don’t make me stop this car!,” but today it’s much broader and affecting many drivers every day. It’s talking on the phone, texting, entering addresses for directions, trying to locate that perfect Spotify station. You may think you are only glancing down a few seconds, but studies show it’s takes an average 5-6 seconds, and a car driving 60 mph would cover an entire length of a football field in that time. Just think about that!
April is Distracted Driving Awareness Month, but efforts to curb distracted driving are ongoing – focusing on ways to change behavior of drivers through legislation, enforcement, public awareness and education. Whether you are driving on the interstate or backing out of your driveway, a lack of focus can be fatal.
When it comes to workplace safety, distracted driving is a big issue. Workers in many industries and occupations spend much time on the road as part of their workdays. One study has shown that compared to other drivers, those who were working were more likely to be in a hurry to reach their destination, be tired or use their cell phone.

According to the Center for Disease Control and Health (CDC), employers should use the following recommendations to prevent distracted driving:
• Ban all phone use while driving a company vehicle – and apply the same rules to use of a company-issued phone while driving a personal vehicle.
• Require workers to pull over in a safe location if they must text, make a call, or look up directions.
• Prepare workers before implementing these policies by communicating:
-How distracted driving puts them at risk of a crash
-That driving requires their full attention while they are on the road
- What they need to do to comply with your company’s policies
- What action you will take if they do not follow these policies
• Consider having workers acknowledge that they have read and understand these policies.
• Provide workers with information to help them talk to their family about distracted driving.

The point is – it’s time to just drive!

Following the Road to Safety

Posted by Richard Griffith on Wednesday, 04 April 2018 in Uncategorized

With winter weather (hopefully) behind us, April typically marks the beginning of road repair work in many states. It’s also a good time for motorists to remember their obligation to look out for the safety of those who share the roadways.

That’s a message that National Work Zone Awareness Week, which this year run from April 9-13, aims to highlight. Its theme, "Work Zone Safety: Everybody's Responsibility”, focuses the safety issues surrounding work zones and necessity of awareness and planning on the part of everyone they affect. That includes everyone from road and utility workers to police and emergency responders to pedestrians, cyclists and motorists.

In Indiana, for instance, road workers are more likely to be killed in motor vehicle crashes than from any other hazard on the job, including those involving workplace violence and machine-related accidents. Since 2014, at least 12 people on average have been killed each year in INDOT roadway work zone crashes. Eighty percent of those killed are motorists or their passengers.

That’s according to the Indiana Department of Labor (IDOL). The department’s website also mentions that the most common causes of collision noted by police include:
-Following too closely.
-Unsafe lane movement.
-Failure to yield right-of-way.
-Ran off roadway.
-Ran over object in roadway.
-Improper lane change.
-Driver inattention.
-Unsafe speed.

The most common types of collision from these cause are rear-end, same direction sideswipe, head-on between two motor vehicles, and leaving the roadway.

Taking Back the Drive

Posted by Richard Griffith on Wednesday, 06 April 2016 in Uncategorized

Whether it’s on the way to-, from-, or for the purpose of work, reaching the destination safely involves the driver being focused on the task at hand: driving.

April is Distracted Driving Awareness month, and the National Safety Council’s theme this year is “Take Back Your Drive.” One estimate by the NSC puts the number of crashes caused by cell phone use and texting while driving at 1.6 million each year. It’s easy to blame the devices themselves, but a growing body of research suggests that they are part of larger picture, one in which they are just another set of contributors to a state of mental distraction.

A newly published study from the Virginia Tech Transportation Institute seems to support this.1 In looking into which type of activity puts a driver at greater risk of being involved in a vehicle crash – a state of emotional agitation or performing activities such as using a hand-held cell phone – emotional agitation came out on top, researchers found. A person who is observably angry, sad, crying or emotionally agitated is almost 10 times more likely to experience a crash. The risk of a crash more than doubles when drivers perform activities that require them to take their eyes off the road, including reading emails or texts, or using a vehicle’s built-in touch screen.

Other research suggests that it isn’t the physical activity of operating a device (or devices) while driving that is the major cause for concern; rather, as some studies involving the use of hands-free cell phone use have shown, cognitive distraction caused by switching between language comprehension and processing the external cues needed to drive properly may be partly to blame.

Posted by Richard Griffith on Wednesday, 08 April 2015 in Uncategorized 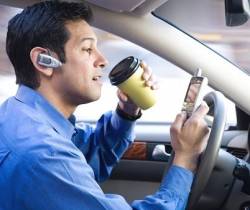 When we think of safety at work, it’s important to consider that for many employees on their way to, from, or for work, safety centers around staying focused on driving. Yet distracted driving remains one of the leading causes of transportation-related accidents.

According to statistics compiled by the National Highway Traffic Safety Administration (NHTSA), in 2012, 3,328 people in the United States were killed in crashes involving a distracted driver, compared to 3,360 in 2011. Another 421,000 people were injured in motor vehicle crashes involving a distracted driver in 2012, a 9 percent increase from the 387,000 people injured in 2011.

Each April, the National Safety Council – a nonprofit organization chartered by Congress – promotes Distracted Driving Awareness Month and encourages motorists to drive cell phone free. The NSC maintains that one concern contributing is the amount of communication devices built into some of today’s vehicles as well as those brought along for the ride. It isn’t the devices that are the problem, the NSC says: It’s the state of mental distraction to which they can contribute.

Distracted driving can come in a variety of forms and arise from a variety of causes, from eating or drinking to adjusting a radio or media player to reaching for an object. But perhaps the distraction most closely linked with the use of technology is the use of cell phones, particularly to send and receive text messages.

A popular notion is that cell phone improves productivity at work by cutting down on the “down time” experienced on the road. Yet, a 2009 survey of NSC members showed that 99 percent of companies with policies that prohibit the use of cell phones and messaging devices while driving saw no decreases in productivity – with some experiencing an increase in productivity – after the policies took effect.

The NSC recommends that companies ban all types of cell phone use while driving, including texting, hand-held conversations and hands-free conversations. All-out bans concerning cell phones continue to be a thorny subject, however. Something that might help to sell the concept to the private sector ahead of government is the issue of liability. For example, when an employee is injured off-site while using a cell phone for company business, does the incident trigger workers’ compensation coverage? If so, it will likely raise workers’ compensation rates – and insurance companies will likely offer strong defenses against such claims.

It’s all something to think about – just maybe not while driving.